Ms. Galea received both her Bachelor of Arts in Political Science (2017), and Masters in International Relations (2019) from McMaster University. Her research for her master’s degree focused on climate change; she has written papers on pipelines, politics and prosecution and on securitizing climate refugees. As an undergraduate, she co-created and led Social Justice at Mac, a student group that explored all aspects of bringing social justice to the industrial areas of Hamilton, including addressing environmental racism.

Ms. Galea has also hosted and led litter cleanups at Bayfront Park, the Bruce Trail and the Hamilton to Brantford Rail Trail. Her ongoing participation in the Fridays for Future Climate Strikes motivate her to work hard for climate justice. She aims to be elected as a Green Party MP, so that she can bring to the forefront of political discussion sustainable policies addressing climate change. 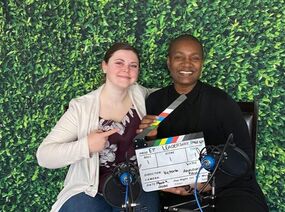 Victoria Galea was unanimously elected to be the Green Party candidate for the riding association of Hamilton West - Ancaster - Dundas on April 28th, 2019. This decision came from her established presence in the Green Party, as she was the CEO for the riding for the two years prior. She seeks to bring the green wave to the shores of Lake Ontario. This election resulted in 4,775 votes at 7.3% of the vote, an increase of 3.07% from 2015.

Since the 2019 election Victoria started a political podcast called Personal Politics, where she interviewed all of the Green Party Leadership candidates. Following this series, she began her work with Annamie Paul, as her Executive Assistant for Ms. Paul's Leadership Campaign.

On October 3rd 2020, Ms. Galea joined Annamie Paul in Ottawa, and had the privilege of being in the room where they announced the historic win for, Ms. Paul. The first black person to ever lead a federal political party, and second Jewish person. A night to remember.

Following this successful bid for leadership, Ms. Paul brought Victoria into the Office of the Leader for the Green Party of Canada, where she continued on as her Executive Assistant. This included many exciting trips to the Hill, press conferences, and meetings with Indigenous communities, Ambassadors, and important stakeholders.

Ms. Galea is seeking the nomination to be the Green Party candidate for HWAD in the upcoming 44th Federal election on August 15th 2021.  ​